NaturVet Pet Health - For the Health of Your Pet

Coping with Coprophagia: Why Does My Dog Eat Poop?

We dog lovers like nothing better than a warm wet kiss from a furry friend. It’s a good sign of the bond we share with them. But there can be one deterrent that would keep us from enjoying that sloppy wet kiss.“Doggy breath” can be bad enough but if you catch your pal eating poop, all bets are off. 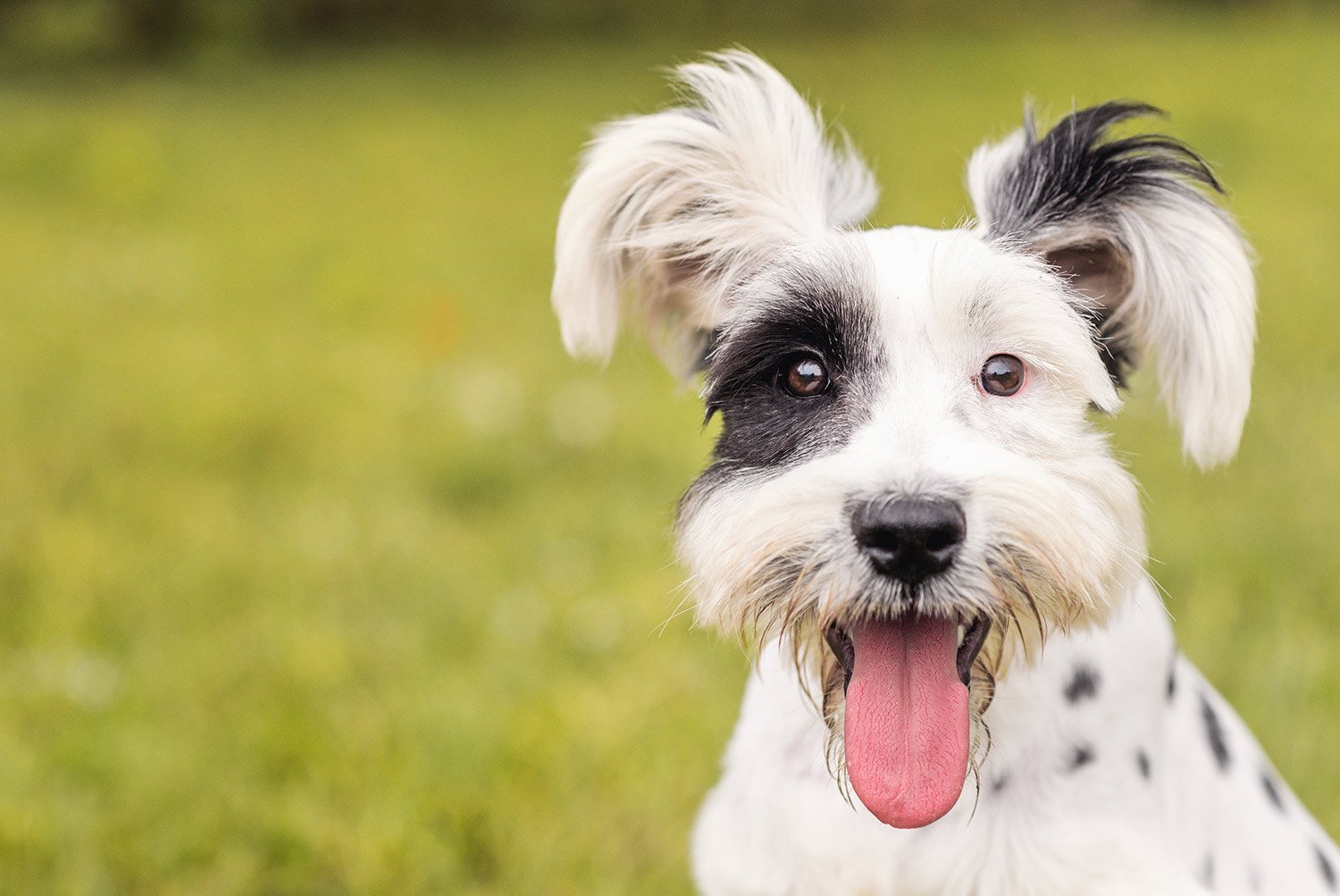 Catching your dog eating poop, termed coprophagia, can be very embarrassing and I suspect many pet parents hide it. Unless concerns develop about their pup’s health, it remains a “dirty” little secret. Compared to how many dogs statistically eat their own stool--which we’ll discuss in just a moment--and how few folks bring it up during appointments, I suspect many pup parents are embarrassed by the very idea. After all, if a human were to engage in such a revolting act, you wouldn’t want to go anywhere near them, right?

Well, as much as our pups are members of the family, this still doesn’t make them true human beings and as such there are some behaviors very different for dogs compared to people. Stool-eating behavior is one of those. But not to fear! I understand this behavior is unpleasant so in addition to discussing why it happens, we’ll also cover 5 tips to help it to stop. 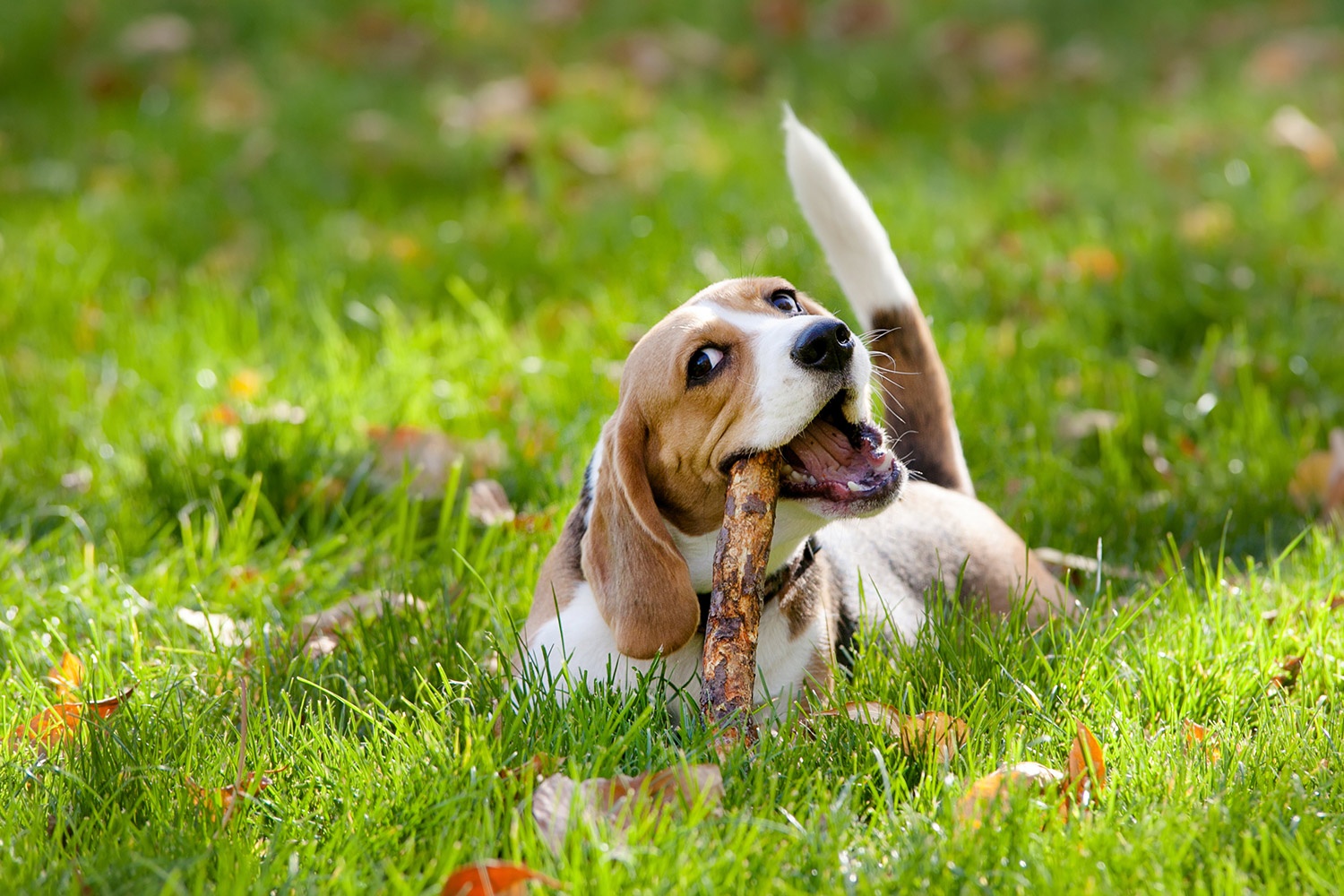 Why Does My Dog Eat Poop?

The first thing to know, is that if you’ve seen your dog eating stool, she’s not alone. According to veterinary behaviorist Dr. Benjamin Hart, about 12% of dogs eat stool consistently and nearly ¼ have been caught doing it at least once.

For many out there who have heard that stool-eating behavior is from a nutritional deficiency, you might be right--but fortunately not in most cases. In most cases, coprophagia is behavioral and in a few moments we’ll discuss some reasons.But first, let’s review the 3 recognized patterns of coprophagia. 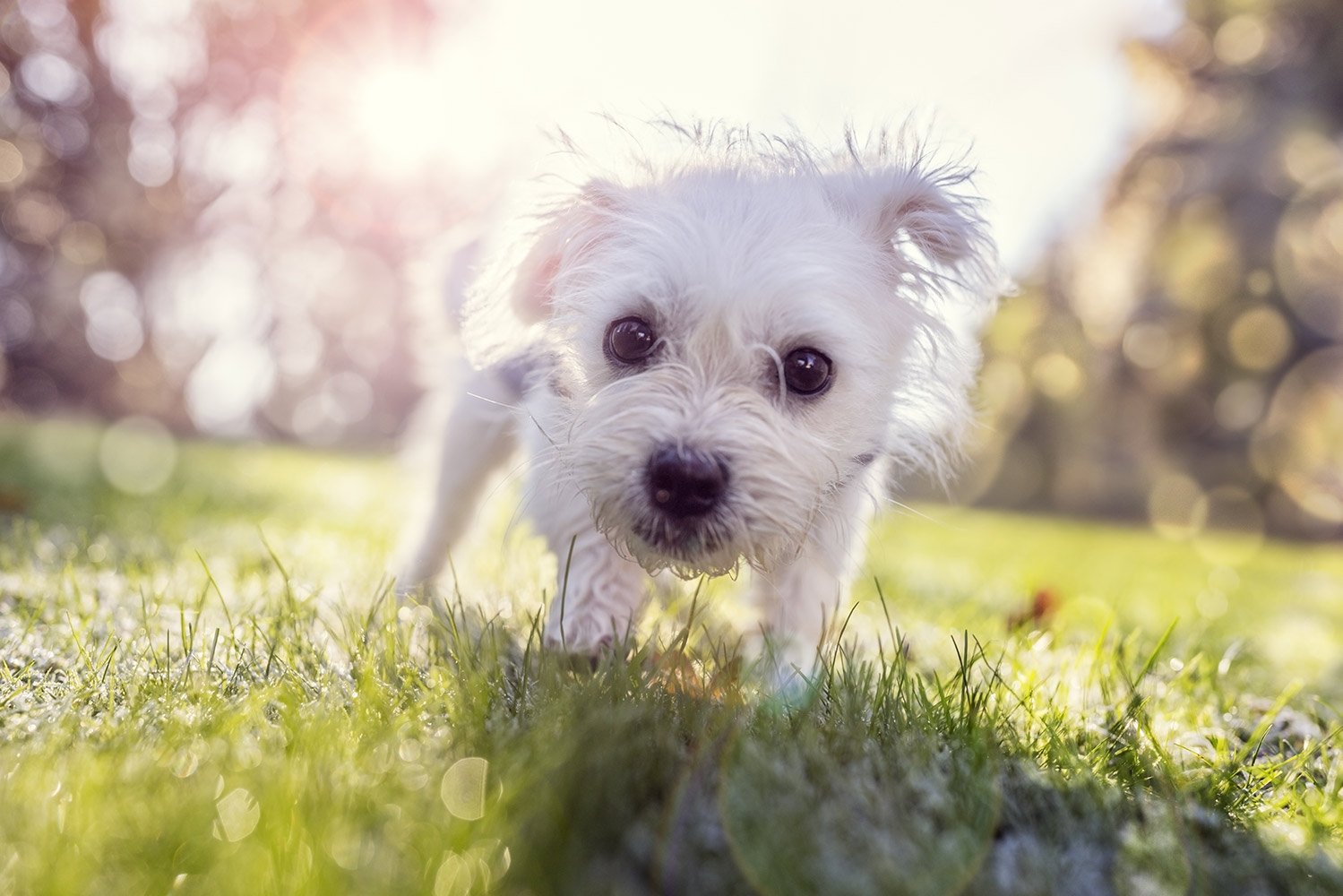 A Fascination with Feces

The first pattern of coprophagia is when a dog eats his own poop. This could be a puppy showing his interest in everything new--including poop. Or a dog cooped up indoors who has an “accident” and ingests it. The second is when a dog eats another dog’s poop instead of his own. This could be a housemate’s or just another random pooch who left a present on the dog walk trail. Why another dog’s poop would taste better is a mystery, but if this is a housemate, it might be worth looking into the why by ruling out some of the medical conditions we’ll discuss in a moment.

The third is when a dog doesn’t eat dog poop specifically, but does eat that of other animals like birds, deer, or farm animals. Although extra gross to us, this may only be part of a natural scavenging behavior as we’ll talk about more.

As mentioned, medical causes of coprophagia are thought to be less common than behavioral. But medical causes are important because they do need to be considered and ruled out first before delving into behavioral causes and solutions. As distasteful as it may be, feces can still have some residual nutrients in it, if those nutrients weren’t digested properly. Thus, malabsorptive disorders, like inflammatory bowel disease or pancreatic insufficiency, could be a reason for a dog to seek out additional nutrients while scavenging outside. It could also be a reason for another dog to seek out a housemate’s stool to eat.

Intestinal parasites, like roundworms, hookworms, whipworms, and giardia, can cause malabsorption too. This is why checking a stool sample for parasites is an important first step in working up a pup patient for coprophagia.

Any disorder that leads to appetite changes, like diabetes, Cushing’s disease, or hypothyroidism can lead to stool eating behavior. Stool-eating is not a specific sign for any medical disease, but they may be considered by your vet as underlying causes for coprophagia in conjunction with other signs and factors.

If your pup is on any medications that can increase appetite, steroids being the classic example, the hunger produced could lead to stool-eating. Even dogs categorized as “greedy” eaters without a known medical condition had a higher instance of coprophagia in Dr. Hart’s study. Lastly, diet can be related. If you’re dog’s food is of poor quality or has low digestibility, a nutrient deficiency could be to blame. And although they’re important when prescribed, some prescription diets that may be less palatable could lead a dog to scavenge elsewhere.

Working through these medical causes with your vet is the important first step to take. If a medical cause seems unlikely for your pup eating poo, a behavioral cause remains a likely possibility.

There have been several theories developed to explain behavioral reasons why dogs might eat stool.  The first is developmental. After her puppies are born, it is a normal instinctive behavior for the dam to ingest her puppies’ stools, to keep them and the surrounding area clean. It is theorized that young dogs may in some way may learn this behavior from their mothers.

Once they leave the nest and find a new home, it is actually common to see puppies eat stool. Although it is still gross, you shouldn’t be concerned about a long-term issue or medical problem--at least not at first. As part of their development, puppies explore their environment to learn more about it. They do this by picking up things they find in their mouths. Dogs have a sense of smell many times that of our own. So, as you can imagine, in the mind of a puppy, something that looks appealing and smells funky is definitely worth picking up to see if it’s edible. Fortunately, with a little consistent training, most puppies work out of this behavior by about 9 months.

In Dr. Hart’s research, dogs were more likely to exhibit stool-eating behavior if they lived in multiple dog households. Coprophagia has also been documented more in dogs adopted from shelters. This suggests that population pressure and stress can be risk factors.

But while overcrowded conditions can be associated with the behavior, so can isolation. Dogs that are left in confinement for long periods of time and don’t receive enough stimulation during the day, may also be at higher risk for the behavior.

The next behavioral cause could unfortunately stem from our own fault and frustrations. When discussing training methods, I often dissuade folks from the instinct to stick their pup’s nose in the mess when they have accidents. With poop accidents, this type of outdated training method has actually been linked to encouraging coprophagia. Some even feel that the shame of having an accident in the house may lead a dog to “cover it up” by ingesting the stool, which leads to further punishment and shame. This cycle needs to be broken utilizing more positive reinforcement methods, which we’ll discuss soon.

The last behavioral cause may be the simplest to explain and pertains only to dogs that eat other dog’s stool out on walks or that of other animals. Instinctively, dogs are scavengers and they have an excellent sense of smell. This is why they are also attracted to smells from our trash and the leavings of other animals. Dogs are constantly attracted to the smell of feces when they investigate their environment. Stools are not unpleasant to them in the same way that they are to people. Gross?  To you and me, sure. But technically, not a behavioral problem.

5 Tips to Cope with Coprophagia

So now that you know some of the “whys” and hopefully feel your pup might be a little less “weird”, let’s discuss some ways to address this display of distasteful dining.

1.)  The first step to take when your pup exhibits coprophagia is to talk it over with your vet. As we discussed, medical disorders are less commonly associated with stool-eating but need to be ruled out before discussing behavioral solutions. Your vet may wish to check a stool sample and/or run some labwork to initially rule out some underlying conditions.

2.)  Taste aversion products, like Coprophagia Stool Eating Deterrant, essentially make a dog’s stool taste bad to them, thus in theory dissuading them from eating it. Many contain yucca, garlic, or vegetable oil to confer a bad taste. I have seen these work, but only if a pup is eating either his own stool or that of another dog in the household.

3.)  Because one medical cause could be poor digestion, consider a highly digestible diet with the protein source as a first ingredient. There has also been some promise shown to B Vitamin supplementation as well as adding in digestive enzymes.

4.)  If coprophagia could be resulting from boredom or isolation, there are fortunately many options nowadays. If you work long hours and are unable to let your pup out during the day, consider making use of one of many dog walking and pet-sitting businesses out there. Getting some extra exercise and playtime might just be what your pooch needs.

5.)  The best thing to do is to keep your dog supervised on walks. If you observe your pup attempting to eat his own stool consistently on walks, try the following training technique: After your dog has a bowel movement, immediately call him over to sit and get a treat. If you’re consistent, this behavior can replace the unpleasant one, using positive reinforcement.

6.)   If your pup eats other animals’ stool outside, you may need to use a negative reinforcement technique combined with a positive one. One technique dissuades the unacceptable behavior and the other reinforces a good behavior. To dissuade the stool-eating behavior, you can use a short tug on the leash or nose halter, and use a firm verbal command like “no” or “leave it”. Alternatively, a citronella collar could also be used on a remote. When your pup gets close to a pile of poo and looks ready to dig in, trigger the remote and she’ll be sprayed with a harmless burst of citronella. But make sure, when she leaves the stool, to provide a treat reward. Eventually, you can move away from the citronella collar and use just a verbal command and positive reward. And just to be clear, electronic shock collars are not considered to be appropriate training tools by many trainers and veterinarians.

Stool eating behavior is pretty gross, and I can certainly sympathize if your pup does it. But depending on the circumstances, just keep in mind that your pup isn’t alone and it doesn’t necessarily mean there is something really “wrong” with him. In fact, coprophagia may be a long-standing ancestral behavior dogs can exhibit. But before you get severely grossed out and the bond with your pup is compromised, talk to your vet and give some of our tips a try.

Lastly, I would also challenge you to not just pick up your own pup’s leavings, but any other poop you may find while out on a stroll. This may sound extra gross, but picking up the poop and keeping the environment clean is the best tool against coprophagia as well as the spread of intestinal parasites.

NaturVet is a pet supplement company that has been manufacturing healthy pet supplements and vitamins for dogs, cats horses since 1994. We believe all pets deserve a quality life and a chance at living that life in optimal health and happiness.

If you enjoy reading our pet health tips and information please be sure to sign up for our blog . If you have any feedback about our products, posts or our company we'd love to hear it via our contact form here.

Join Us on Social Media